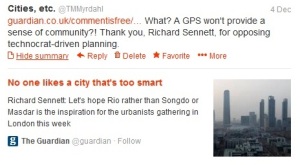 Loath as I am to squash the dreams of the young and impressionable (or the wise and not-impressionable, for that matter), Richard Sennett’s recent piece in The Guardian compels me to address a common misapprehension about urban planning: that is, urban planning is less “sidewalk ballet” and more “instruction manual”. Those who come to urban planning via Jane Jacobs’ idealistic descriptions of Greenwich Village, or by way of the smart writing about Canadian cities in Spacing, may be surprised to find that the work of planners is often dominated by bureaucratic concerns, such as negotiating zoning policies that have longer staying power than any sitting city council.

Indeed, urban planning’s technocratic tendencies are caused in part by its function: that is, planning as a strategy to govern space. The very origins of urban planning can be located in the division of land into “appropriate” uses – and users. Thus, it should be no surprise that urban planning is at its base focused on the procedural elements of municipal policy (in particular, how to operationalize policy within a context of a) competing interests and b) bureaucratic disincentives to change).

Yet, there remains a tension between the romantic ideals that are ascribed to planning – as in, the ability to create vibrant communities through urban design – and the functional purpose of planning. This is the tension that I aimed to draw out in my snarky tweet about Sennett’s article: “What? A GPS won’t provide a sense of community?!”

Don’t get me wrong: interesting, dynamic, well-used public spaces are often the product of good planning, just as poor planning can inhibit the use of urban space. But, as Sennett identifies, planning is best when it responds to and reflects the “complex tissues of local life”. Planning that is only prescriptive in its attempt to shape the urban experience is planning at its worst.

The thing that strikes me most about Sennett’s argument is that he even needs to make it. The fact that he needs to specify that “efficient” urban living may be attainable but is not desirable should serve as a reminder that urban planning must actively confront its masculinist drive to retain top-down control over the spaces that fall under the purview of a master plan. (I’m using masculinist in Cartesian terms here; it refers to an expectation that mind – and men, literally – can control matter.) Top-down control, as Sennett points out, creates passive urban consumers rather than citizens who take ownership over urban spaces to carve out their own sense of place.

“Smart cities” are simply the most recent iteration of the technocratic tendency in urban planning. Given that smart cities can be read to combine a functional definition of efficiency with a clearly defined centre for command and control, I find it entirely unsurprising that they entice planners who subscribe to a Le Corbusier ethic of urban life. However, urban life should not always be efficient (or perhaps efficient needs to be re-defined in a way that accounts for its long-term implications). (On “inefficient” urban life, take a look at this story about learning to look at one’s neighbourhood.) Moreover, many of the most vibrant urban spaces – the spaces that people want to live in and travel to and experience – are those that are defined and developed by their users.