For those who would like to write a Reading Response for Oct 17, here are four questions that you may consider to prompt your writing:

The disparate nature of this week’s readings is suggestive of the diverse approaches to, and ways to understand, urban health. Susan Hanson focuses on the relationship between gender and mobility (and the ways that social position informs movement generally), as well as the profound disconnect between the different modes of research aimed at addressing gender and mobility. Carrie Bourassa and her colleagues discuss the ‘legacies’ of colonialism and their implications for the health of Aboriginal women. The Native Women’s Association of Canada provides policy recommendations aimed at addressing the racism, sexism, and effects of colonialism that Bourassa et al describe. And the Complete Streets Gap Analysis illustrates the nuts-and-bolts of implementing policies and land use changes to support “active transportation.”

In this post, I want to highlight a couple of points from the readings but then turn to just a few of the many other issues that we could consider when addressing urban health.

The first point takes up Hanson’s discussion of gender-mobility research and its relevance to the direction and adoption of policies that encourage sustainable mobility and sustainable futures. In particular, I’m taken with Hanson’s ability to balance the contributions from distinct epistemologies and methodologies. I’m also taken with her resolution: she contends, “It is not enough to say that context matters, just as it is not enough to say that gender matters. We need to demonstrate how and where these matter and to whom” (p. 18, my emphasis). Arguably, this is one way to begin to bridge what seems like a conundrum of irreconcilable differences; that is, the (perceived) chasm between post-structural theory (which takes as its task the deconstruction of seemingly coherent objects, such as the category “woman”) and policy (which seems to require a coherent object in order to address disenfranchisement and inequality). If you want a reminder of how this conundrum has influenced other research, revisit the Pratt chapters that we read at the beginning of the semester.

The second point relates to the Bourassa and NWAC texts. Writing about First Nations women’s efforts to address the needs of First Nations women living in urban areas, Evelyn Peters (2006, 323) offers a similar set of findings. She writes that First Nations women persistently identify “the need for services which not only address their situation as women in the city, but also take account of their needs as First Nations women. Some of these needs derive from perceptions of racism and inequitable treatment for Aboriginal women in non-Aboriginal organizations.” The larger argument that Peters makes is about the ways in which colonial definitions of First Nations identity have impacts on Aboriginal women’s daily lives: their mobility, the kinds of service provision they can access, the location of services, and so on. The point that all of these authors emphasize is the vastly inaccurate depiction of colonial practices and policies as ‘legacies’. Whereas legacy assumes that colonial policies are located in the past, these readings show that colonial practices and policies currently shape many Aboriginal women’s lives. In fact, we must extend that point: colonial practices and policies also shape the lives of those who quietly or explicitly benefit from the settler colonial narrative and its very material consequences. The debacle of the “Manifest Destiny” t-shirt produced by The Gap is a great example of how insidious racism is perpetuated by seemingly banal consumer trends. Thus, we need to be mindful of the ways that power works: to constrain, to bolster, to privilege some, to differentiate “us” from “them.” Two other great resources that are relevant to the discussion of settler colonialism and the colonial present: Adrienne K’s blog Native Appropriations offers timely and fantastic analyses of cultural appropriation and its effects, and Scott Morgensen’s popular forum for making links between his recent book, Spaces Between Us, and other (scholarly, activist) efforts toward decolonization.

Of course, the four texts for this week present a small sliver of the topics that might be covered under the rubric of “a holistic view of urban health.” Let me mention just a few others.

Urban design. As we have discussed during in-class conversations about walkability and a sense of place, the design of the built environment influences its use (or lack of use). This is true for monumental architecture such as the Oslo Opera; pictured in the header at the top of this page, the building and grounds function as a destination (concerts inside and outside), tourist attraction, and public space. It’s also the case for other types of development (e.g., residential, mixed-use, institutional): the use (or lack thereof) is informed in part by design. Of course, design is not the only factor at work. As Susan Handy and her colleagues (2002) write in the American Journal of Preventive Medicine, urban design works in conjunction with land use patterns and transportation systems to promote a certain type of mobility. This is part of where the TCAT text comes in. As Devlin et al write (2009) in their report Physical Activity and Transportation Benefits of Walkable Approaches to Community Design in BC, “Modest changes in the walkability of a neighbourhood can translate into important, health-enhancing increases in active transportation and physical activity.”

Still, the energies being dedicated to interdisciplinary work that looks at design and use is exciting, particularly when this work addresses some form of social sustainability. http://makecalgary.com/ is one example that has emerged out of the University of Calgary’s Faculty of Environmental Design to encourage participatory urban design. The Pop-Up City is another; its focus is flexible urbanism. My favourite post featured the work of artist Candy Chang, who facilitated a neighbourhood imaginary about transforming un-used spaces into places that people need and desire. 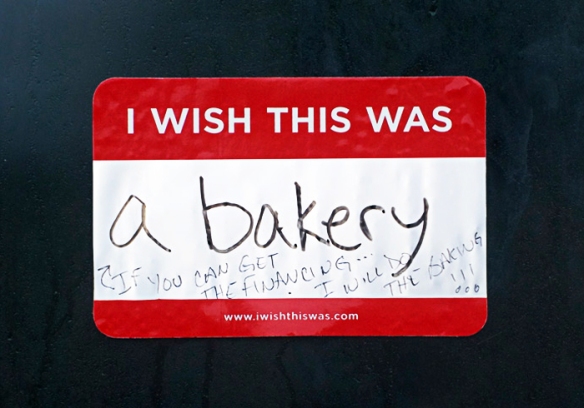 Design by Candy Chang. The image comes from http://iwishthiswas.cc/.

Food (in)security. Urban health is inextricably linked to the food that is available to us. We can think about this in terms of food quality, cost, and accessibility, for instance: in a given neighbourhood, where can people buy food? Are there green grocers or markets, or must people rely on convenience stores and petrol stations? Is there a low-cost grocery accessible by public transit? Does the grocery in the neighbourhood accept food stamps or equivalent? Is there a neighbourhood garden or urban farm that serves the needs of community members (in terms of food and building social capital)?

The work being done on this topic alone could inspire a semester-long course. Urban food deserts are one area of concern; simply put, these are areas of cities that have little or no access to quality food sources. (Here is a Canadian focused blog on the topic developed by an undergrad student at the University of Guelph.) Food insecurity has particular health consequences for immigrant and refugee communities (three reports are being released by CERIS researchers later this week) and for people living in poverty. An initiative began today in BC to raise awareness about the current rate of income assistance, which leaves the single, able-bodied adult with $26 per week to feed themselves. Read about the initiative at http://welfarefoodchallenge.org/. Another (longer term) response to food insecurity is urban farming (and guerrilla gardening). Growing Power is a great example of an expansive urban farming-community engagement project.

Physical, mental, and emotional well-being. One small slice of this broad topic is freedom from violence and the threat of (physical, mental, and emotional) abuse. The work that feminist movements do -to support the needs of those targeted by intimate partner violence, for example, or to demand attention about violence against women- is central to the promotion of physical, mental, and emotional well-being. A recently published global study by Htun and Weldon (2012) has demonstrated the importance of feminist movements to addressing normative violence against women. The authors show that “strong, autonomous feminist movements were the first to articulate the issue of violence against women and the key catalysts for government action, with other organizations sidelining issues perceived as being only important to women. Strong movements commanded public support and attention, and convinced the media the issues were important for public discussion. In countries that were slower to adopt policies on violence, feminist movements leveraged global and regional agreements to push for local policy change.” (An example of the boomerang effect, which a student raised in class last week!) To further connect this point with last week’s material, Htun and Weldon note that feminist movements that were autonomous -outside of and not reliant on the support of the state or political parties- were better able to identify their priorities and organize to accomplish them. According to these authors, social changes that come from civil society -regardless of a country’s wealth or other factors- have the greatest effect to transform policies focusing on violence against women. (Thank you to Marsha for alerting me to this article!)

By comparison, in Vancouver, city government is currently undertaking a long-term strategy to address social sustainability using a model that encompasses healthy people, healthy communities, and healthy places. It remains to be seen how this strategy will be operationalized, and that will be determined in part by the participatory process that the city will engage in next year.

1 thought on “October 17: “Generating a Holistic View of Urban Health””